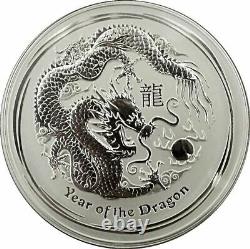 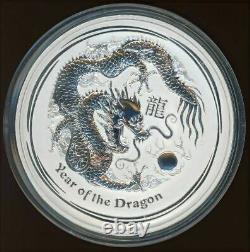 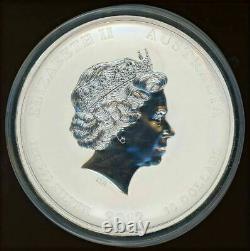 Each coin comes in a plastic capsule. Obverse: The Ian Rank-Broadley likeness of Her Majesty Queen Elizabeth II and the monetary denomination. Reverse: Features a traditional Chinese dragon, a long, scaled, serpentine creature with four legs, and a "Pearl of Wisdom" and the Chinese character for Dragon.

Sovereign coin backed by the Australian government. The Silver Mint Perth Lunar Series II is one of the most widely sought after collections in production today.

The collection is a beautiful tribute to the Chinese Lunar Calendar and was introduced in 2008, following the popularity of the first Silver series release in 1999, and will end in 2019. The coins come in sizes of 1/2 oz, 1 oz, 2 oz, 5 oz, 10 oz, 1/2 kilo and 1 kilo and all contain. The Silver Perth Lunar Series II features a different animal every year, starting with the mouse coin in 2008 followed by the ox, tiger, rabbit, dragon, snake, horse, goat, monkey, rooster, dog and pig. The obverse features the profile of Her Majesty Queen Elizabeth II as captured by Raphael Maklouf.

Although the Gold Perth Lunar Series II has also been released each year since 2008, the Gold and Silver editions feature differing designs. The Lunar Series is based on the ancient 12-year Chinese lunar calendar, which dates back to 2,600 B. The Lunar Calendar is steeped in tradition and symbolism.

Based on the appearance of the moon, the Lunar Calendar associates a different animal with each year in the 12-year cycle. These animals are said to have a profound influence on the personalities of people born under their rule. Established in 1899, the Perth Mint predates the federation of Australia by two years. The mint was initially established for two reasons: to refine the vast amounts of Gold flooding in from various areas of Western Australia and to produce Gold sovereigns and half sovereigns to be used throughout Great Britain. Although Australia became an independent nation in 1901, the Perth Mint remained under the authority of the British crown until 1970. Following a 1987 State Act of Parliament, Gold Corporation, a company entirely owned by the Government of Western Australia, was established and mandated to operate the Perth Mint to market their Gold, Silver and Platinum Australian coins overseas.

The Perth Mint is also known for its outstanding quality and industry-leading creations. In 1957, the mint produced a 13 oz proof "plate" of.

999999 fine Gold, the highest purity ever achieved. In 2011, they created the world's largest, heaviest and most valuable Gold coin, containing.

Actual Weight: 32.15 troy oz. Diameter: 100.6 mm, Thickness: 14.6 mm. We are committed to providing the highest quality Coins and Bullion items on the market along with 5 stars service. Customers should satisfy themselves that any item choice made is suitable for their intended purpose or use. We pride ourselves on our customer service.

We have a very low return rate so we are very confident that you will be 100% happy with your items. Don't miss any offers! This item is in the category "Coins & Paper Money\Bullion\Silver\Coins". The seller is "goldsilverbullioncanada" and is located in this country: CA.