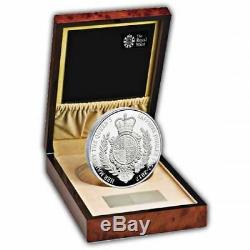 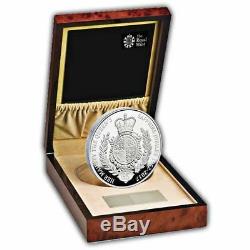 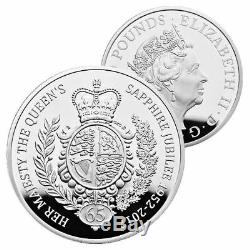 Many millions more watched on television all across the Commonwealth, little knowing that we would go on to enjoy a Golden and later Diamond Jubilee. In 2017 The Queen will reach an unprecedented milestone of 65 years as Britains monarch becoming the first and only British king or queen to celebrate a Sapphire Jubilee. Just as we have for every important royal occasion, The Royal Mint will issue the only official UK coins to mark the event.

This silver kilo coin is struck in 999.9 fine silver and finished to Proof standard. The celebratory reverse, exclusive to the kilo and five-ounce coins in the Sapphire Jubilee range, was designed by Gregory Cameron, who also created the reverse of the UKs last commemorative round pound. The coin comes with a booklet produced in collaboration with former BBC Royal Correspondent Jennie Bond, who has reflected on what has made Queen Elizabeth II such a popular monarch. Additional images (may include other items available from this collection). Island Stamps and Coins is a trading name of Island Numismatics.

We are based in the Isle of Man, a small island in the middle of the Irish Sea between England and Ireland. We specialise in new uncirculated and Proof Silver and Gold coins from Great Britain and its dependencies. We also deal in new Isle of Man Commemorative Stamps in Mint and Cancelled to Order Sets as well as other related gifts. We will send a replacement for any items that have been damaged in transit. We also accept Personal Cheques payable to "ISLAND NUMISMATICS". The item "The Queen's Sapphire Jubilee 2017 United Kingdom Silver Proof Kilo Coin" is in sale since Wednesday, August 16, 2017. This item is in the category "Coins\Coins\British\Proof Sets/Coins\2000s". The seller is "islandsandc" and is located in Isle of Man.