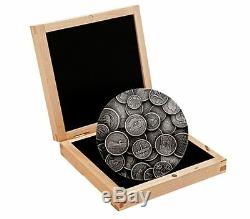 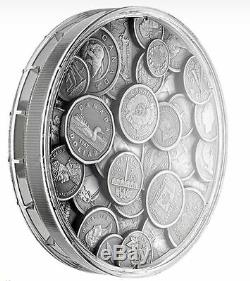 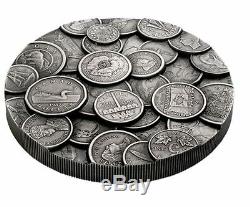 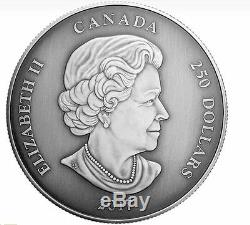 YOU'VE NEVER OWNED ANYTHING QUITE LIKE IT! On July 1, 2017, Canada celebrates the 150th anniversary of Confederation! Applying cutting-edge ultra high relief technology to a kilogram format coin, this is our first coin to feature true-to-size recreations of circulation coin reverses and obverses from the last 150 years.

Each coin featured on the reverse was specially selected to highlight key moments in Canada's history since Confederation, from the effigies of the various Kings and Queens who have reigned over our constitutional monarchy to the moments that have pressed us toward the modern era. Featuring approximately 35 obverse and reverse images from previous and current circulation coinage, this amazing large-format coin makes the ideal canvas of purest silver.

From the 100th Anniversary of Women's Right to Vote to the Victory Nickel of the Second World War, from the War of 1812 to the 50th Anniversary of the Canadian Flag, and from the Canadian Arctic Expedition to the Canadian Centennial, this amazing coin takes us on a journey through Canada's most memorable moments. Its stunning antique finish lends even more depth, detail, and patina to a design we guarantee you've never seen before.

An amazing coin for the Canadian circulation coin collector! TAKE A 150-YEAR JOURNEY THROUGH CANADIAN CIRCULATION COINAGE ALL ON A SINGLE COIN! This amazing ultra-high relief coin whose diameter spans a whopping 102.1 millimetres reproduces important circulation reverses and obverses in their original diameters! The lofty 4.4-millimetre relief height raises this coin high above the standard 1.2-millimetre height for a one-kilogram coin! The antique finish lends extraordinary depth, detail, and patina to a collection spanning from the Georgian era to today's circulation designs! Your coin is packaged in a beautiful wood collector's case with a black beauty box.

Limited mintage worldwide of just 500 coins. Your coin is crafted from one kilogram of 99.99% pure silver. The design of this amazing ultra high relief coin of 99.99% pure silver features reproductions of more than 35 historical Canadian circulation coinsall in the actual diameters of the originals! All of Canadian artist Alex Colville's 1967 Canadian Centennial designs.

All current Canadian circulation designs, including the 1-cent piece whose production ended in 2012. The 2015 50th anniversary of the Canadian flag 25-cent piece. The legendary Voyageur dollar first released in 1935. Each of the major obverses since the Royal Canadian Mint opened in 1908, including the effigies of King Edward VII, King George V, King George VI, and Her Majesty Queen Elizabeth II.

The Victory Nickel of 1943 to 1945. The Celebrating Women's Right to Vote dollar.

The diameter of each coin featured on the reverse is the same as its real-life counterpart! Canadian coinage has featured numerous effigies of the six monarchs who have reigned since Confederation, including four effigies of Her Majesty Queen Elizabeth II throughout her 63-year reign.

Though the 1-cent coin was discontinued in 2012, its beautiful maple leaf twig reverse design by G. Kruger-Gray was so iconic that we have included it here. Coin is encapsulated and housed in a wooden display case with a black beauty box.

The item "The Canadian Coin Collection Silver One Kilo Ultra High Relief Coin Mintage 500" is in sale since Sunday, April 30, 2017. This item is in the category "Coins & Paper Money\Coins\ Canada\Commemorative". The seller is "finecoin_canada" and is located in North York, Ontario. This item can be shipped to Canada, United States.