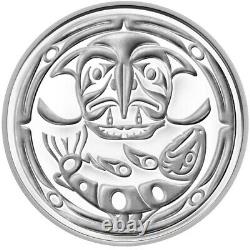 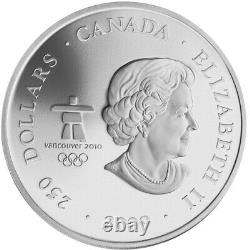 Olympic Fine Silver Kilo: Surviving The Flood. About the Story: Surviving the Flood. In ancient times, a great flood happened that threatened the survival of the Squamish people. The people banded together in canoes, and tied their canoes to En cheki - now called Mount Garibaldi - so they would not drift away.

An eagle caught salmon and dropped the fish into the canoes, giving the Squamish people sustenance and ensuring their survival. This story depicts the power of many working together.

It also illustrates the power, connection and interdependence between man and nature. In May 2007, VANOC posted a request for proposal inviting Four Host First Nations artists and designers interested in working with VANOC to develop unique Aboriginal art-inspired designs for its merchandising program. An evaluation committee made up of VANOC representatives and external Aboriginal art experts carefully reviewed the responses creating a short list of artists to interview. After completion of the interviews, VANOC announced the selection of Xwa Lack tun based on his reputation, artwork and experience working in creative collaborations.

By focusing on how traditional stories relate to his own life, he shows us how to use this ancient knowledge to help heal ourselves. The spreading of positive energy and seeing it come back through the children he works with in the Lower Mainland School Districts, is a reward that continues to feed Xwa Lack tun's spirit. Xwa Lack tun's work is internationally recognized. He has completed projects with galleries across North America and has been commissioned by private and corporate clients to create a wide array of artwork - including the widely recognized set of yellow cedar double doors, fully carved on both sides, for BC Hydro's head office in Vancouver. In 2001, he was invited to Scotland to promote the country's totem pole project.

Respect for all people, regardless of race or religion, is a central theme in Xwa Lack tun's work and his life. 9999 pure silver coin with the guaranteed weight of 1 kilo. A very limited mintage of each coin will be available to coin collectors worldwide. Coin is encapsulated and housed large black clamshell case with custom olympic outer. Citadel Coins Halifax, Nova Scotia Official Royal Canadian Mint Distributor.

The item "Surviving The Flood 2009 Canada $250 Fine Silver Kilo Coin" is in sale since Friday, January 22, 2021. This item is in the category "Coins & Paper Money\Coins\ Canada\Commemorative". The seller is "citcns" and is located in Halifax, Nova Scotia. This item can be shipped worldwide.