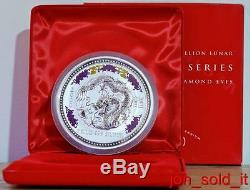 Rare 2000 Australia 1 kilo Dragon Coin w/Diamonds LE. This coin is very rare and very hard to come by. The Coin incorporates a colored border and a central design that features 2 diamonds as the dragon's eyes. The Coin is minted and inspected by the perth Mint and is legal currency for Australia. It contains 1 Kilo of 99.9% Silver and Two 0.02 Carat of golden colored Diamonds.

The coin has a limited edition size of 5000 only. Comes with its original Red presentation case.

Makes a great gift, especially for those who are born on the dragon years on the Lunar calendar. Year 2000 Dragon year is a special year. This is the First Time in 3000 Years that the Dragon year has occurred at the end of a millennium.

The Dragon is the ultimate symbol of the wisdom and culture of the chinese nation. For thousands of years it has represented the people's spirit for advancement and their desire to express themselves through the beauty of life. The dragon is seen as the incarnation of power and authority, it can change its shape, swim the deepest seas and fly to the heavens. Of all the Chinese symbols, it is regarded as the most important , commanding heavenly dignity and is often depicted among the clouds The Dragon Throughout history, in virtually every part of the world, mans imagination has been fueled by the magic and majesty of dragons. These strict guardians have protected buried treasure, golden fleece, even immortality. In China, the dragon has prevailed as the trusted custodian of the highest fonn of wisdom the pearl. As a supernatural power, the dragon became the symbol reserved strictly for the Emperor. Those who chose to embroider a dragon upon their clothing dared to equate themselves with the Emperor and did so at their own peril. Dragon and Emperor were one. The dragons pearl, believed to reside in the dragons throat, represented the indisputable authority of the Emperors words. At the dawn of a new millennium, "The Year of the Dragon" brings with it the promise of prosperity. If you have any questions, Please feel free to contact me at.

The item "Rare 2000 Australia 1 kilo Dragon Coin withDiamonds LE" is in sale since Wednesday, December 24, 2014. This item is in the category "Coins & Paper Money\Coins\ World\Australia & Oceania\Australia\Commemorative". The seller is "jon_sold_it" and is located in Fresh Meadows, New York.