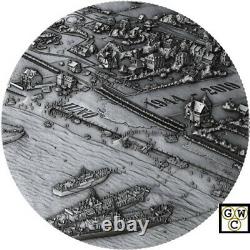 Pure Silver Ultra-High Relief One Kilogram Coin - D-Day: A Snapshot in Time. We were young, but we had bravery well beyond our years. We didn't go into Normandy to leave our mark on history we went in to liberate France from the Nazis, knowing how much hinged on our success. On land, on water, and in the air, we gave our all for victory at Juno Beach and beyond. Canada had a frontline view of victory on D-Day, and throughout the Normandy campaign.

It was at Juno Beach that 3rd Canadian Infantry Division supported by 2nd Canadian Armoured Brigade came ashore on the morning of June 6, 1944. And it was here that valour and sacrifice in the sand, sea and sky laid the foundations of a greater Allied victory, one that extended well beyond the beaches and first-day objectives. Our year-long commemoration of the Normandy campaign comes to a close with a kilo-sized pièce de résistance that is a labour of love and a reverent homage to Canada's veterans. The sky-high view of Juno Beach shows D-Day from a flyer's perspective, the highest possible viewpoint that day. Looking down from an RCAF Mustang, one gets a sense of the magnitude of this historic event that was unprecedented in both size and scope.

The coordinated combined operations amphibious assault required over a year of planning and training. Attention to detail was key then, and it is crucial on this coin, where even the smallest feature has historical significance. Nestled in its wooden collector case, your pure silver snapshot is appropriately aged thanks to an antiqued finish, while ultra high relief technology gives it a relief height of nearly 4 millimetres.

The reverse includes the word'JUNO' and the 75th anniversary commemorative dates,'1944 2019', all in a military stencil font. The obverse features the effigy of King George VI by T. If you look closely at the engraved reverse, you'll find: two LCI(L), one LCS(S) and one LCT craft; 42 vehicles, including M4 Sherman and Churchill AVRE tanks, flamethrower WASP 2S, D7 armoured bulldozers, and more; 58 houses, with Canada House (also known as Hoffer House) on the left; and 453 soldiers on craft, in the water and on land. Each of these individual design elements took at least one full week to develop. Your coin is encapsulated and presented in a Royal Canadian Mint-branded wood case with black beauty box. Composition 99.99% pure silver. Artist Royal Canadian Mint engraver Traian Georgescu (reverse), Susanna Blunt (obverse). The item "2019 Kilo'D-Day A Snapshot In Time' $250 Silver Coin 1Kg.

9999 Fine (18827)" is in sale since Wednesday, January 6, 2021. This item is in the category "Coins & Paper Money\Coins\ Canada\Commemorative". The seller is "gatewestcoins" and is located in Winnipeg, Manitoba. This item can be shipped to Canada, United States.