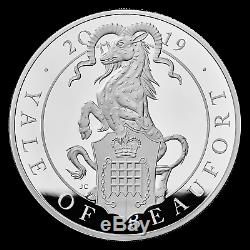 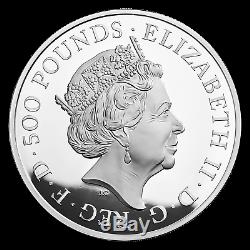 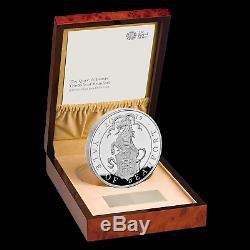 2019 GB Proof 1 kilo Silver Queen's Beasts Yale (w/Box & COA) - SKU#186789. Photos in this listing may or may not be stock photos. The photos are meant to be an indication of the product you will receive. Comes in a box and includes a certificate of authenticity. Obverse: Portrays the effigy of Queen Elizabeth II.

Reverse: Designed by Jody Clark, the design features a magnificent yale, a mythical creature with regal stature. Guaranteed by The Royal Mint. This majestic coin is a must-have for any collection!

Add this 2019 GB Proof 1 kilo Silver Queen's Beasts Yale coin to your cart today! When Her Majesty The Queen was crowned in 1953, ten statues stood guard at her coronation in Westminster Abbey, fierce royal protectors called The Queens Beasts. They represented centuries of history and heritage that were passed on to Her Majesty that day. Now, 65 years later, The Queens Beasts Collection from The Royal Mint explores these ten heraldic guardians, what they stand for and the monarchs they have represented through the ages. Each beast has its own story to tell and the sixth release celebrates the magnificent Yale of Beaufort.

The yale is a mythical beast, described to be the size of a hippopotamus, with the tail of an elephant and jaws of a boar. It descends to The Queen through Henry VII, who inherited it from his mother, Lady Margaret Beaufort. Her position as a matriarch brought the yale prestige and a symbolic meaning. Today, the yale can be seen guarding prominent buildings of education such as Yale University, Christ's College and St. John's College in Cambridge.