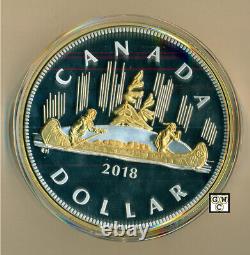 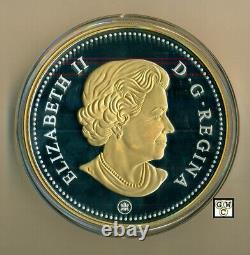 The classic Voyageur dollar design in one kilogram 99.99percent pure silver! More than 80 years ago, these inspiring images of Canada were combined together in a now-classic design that is reverently known as the Voyageur dollar. The history-inspired image was a fixture on Canada's dollar coins between 1935 and 1986, and it has since appeared on several commemorative issues. But the Voyageur has never made its way onto a kilo coinuntil now.

A gorgeous addition to your already stunning pure silver kilogram coin display! THE FIRST VOYAGEUR DOLLAR KILO! A classic Canadian coin design makes the long-awaited leap to a premium one-kilogram format. THE BIGGEST VOYAGEUR DOLLAR COIN EVER ISSUED! Your one-kilo coin is almost three times the size of the original 1935 Voyageur dollar, and 1.5x bigger than our 2018 5 oz.

Your coin is a fresh take without altering the design. In addition to special frostings, select elements on the obverse and reverse are selectively gold plated to create a rich colour contrast.

This king-size reproduction of Emanuel Hahn's historic design brings renewed appreciation for the finer details that are often overlooked on smaller coins. With mintage limited to 350 worldwide, your spectacular coin is an exclusive collectible that brings added prestige to your collection. Your coin includes a serialized certificate!

Your coin is GST/HST exempt. Your selectively gold-plated reverse features Emanuel Hahn's historic Voyageur design, as seen on Canadian dollar coins issued between 1935 and 1986. A canoe traverses the centre of the image; between the paddling voyageur and guide are bundles of wrapped furs and provisions. Wind-swept pines rise up from an islet in the background, while stylized vertical rays represent the aurora borealis in the sky.

The canoe, travellers and pines are all gold-plated. The engraved relief includes the words "CANADA", "DOLLAR" and an amended date, "2018". The obverse features gold plating along the rim and on the effigy of Her Majesty Queen Elizabeth II by Susanna Blunt.

The Voyageur was Canada's second silver dollar design. In 1910, preparations were underway for Canada's first silver dollar coin, which would have featured a crown and a maple wreath on its reverse. The death of King Edward VII on May 6, 1910, delayed the new issue. While three trial versions were struck in the fall of 1911, the newly elected Borden government opted to shelve the new denomination before it was issued. The 1935 Voyageur dollar is historic in many ways.

Canada's first silver dollar coin was issued in 1935 to commemorate the Silver Jubilee of King George V, whose effigy appeared on the obverse. It was our first silver dollar, our first commemorative coin, and the first coin to feature a domestic design on the reverse: The Voyageur image re-created on this kilo coin. In 1986, the Voyageur was the first choice for a new circulation dollar coin. You know it as the "loonie" today, but our circulation dollar coin was supposed to feature the Voyageur image on its reverse.

When the master dies went missing in November 1986, the intended Voyageur reverse had to be replaced with an archived conceptand the "loonie" made its debut on June 30, 1987. Your coin is encapsulated and presented in a Royal Canadian Mint-branded maple wooden box with a black beauty box. OOAK , Discoloration on the Coin near Voyageur's hand. The item "2018Kilo'Voyageur Silver Dollar' Gold-Plated Prf $1 Fine Silver Coin(18645)OOAK" is in sale since Monday, November 23, 2020.

This item is in the category "Coins & Paper Money\Coins\ Canada\Commemorative". The seller is "gatewestcoins" and is located in Winnipeg, Manitoba. This item can be shipped to Canada, United States.