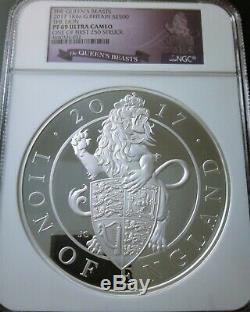 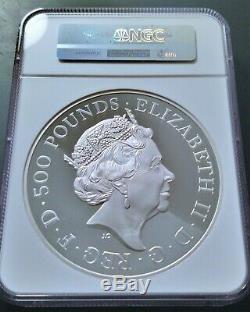 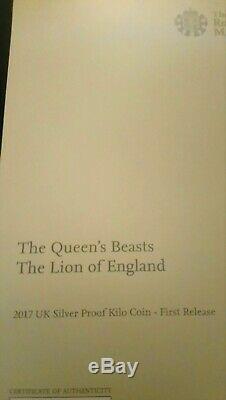 2017 The Lion 1 Kilo Silver Proof Coin. As Her Majesty The Queen arrived at Westminster Abbey on 2 June 1953, Ten fantastical figures stood guard. The heraldic beasts lined the entrance as the coronation began each statue a symbol of royal ancestry with its own fascinating story to tell. Now more than 60 years later, The Queens Beasts have inspired a new coin collection that begins with the Lion of England. Royal Mint coin designer Jody Clark turned to both heraldry and nature when he created his dynamic interpretation of the beasts.

His Rampant regal Lion features on the reverse of the coin along with the fifth coinage portrait of Queen Elizabeth II on the obverse. This Magnificent 1 Kilo Silver Proof Coin was submitted to. The Numismatic Guaranty Corporation (NGC). First 30 days of availability &. Awarded the grade of Proof 69 which.

Guarantees the specimen is near to Perfection. Accompanied by Ultra Cameo (which proves it's Stunning visual contrasts). On an exclusive Queen's Beasts label. This Highly collectable Coin is in Immaculate Condition with No minor marks or blemishes.

The perfect centrepiece to any Collection. Complete with Royal Mint Certificate of Authenticity. The item "2017 Queen's Beasts The Lion 1 Kilo Silver Proof Coin NGC PF69 Ultra Cameo £500" is in sale since Sunday, May 3, 2020. This item is in the category "Coins\Coins\British\Proof Sets/Coins\2000s".