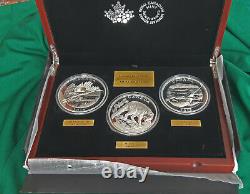 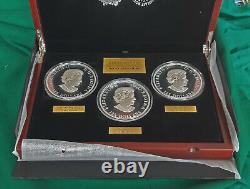 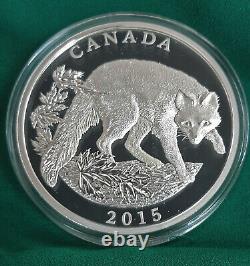 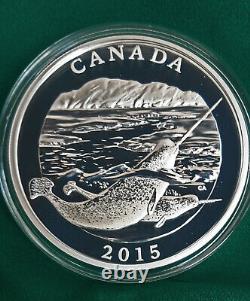 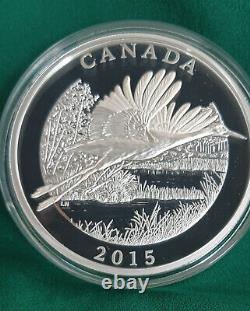 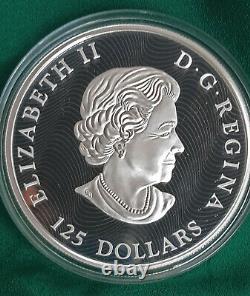 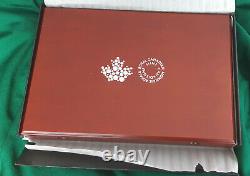 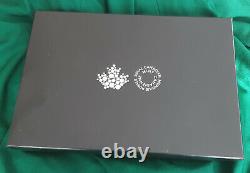 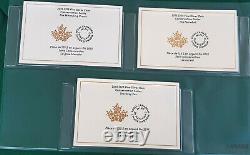 2015 Conservation Series - 3 coin set. Coins are 1/2 kilo each. This listing is for the 2015 3 coin Conservation Set. They are minted to the standard of 99.99% purity!! The obverses have the image of the Queen (by Susanna Blunt). A uniquely numbered certificate for each coin is included.

Very limited mintage of only 500! The reverse design by Canadian artist Laurene Spino features a full-body portrait of a grey fox standing on a maple bough. This lovely image captures the silent intensity of this extremely efficient predator. Viewed from its right side with its face turned toward the viewer, the furry fox stands poised to pounce from the bough on which it stands, its front left paw raised and ready for action.

A variety of engraving and finishing techniques highlight the grey foxs unique physical traits, including its masked eyes, dark back, tail stripe, and long legs. The left side of the image includes several branches of feathery maple leaves, underscoring the grey foxs Canadian presence. The grey fox is extremely rare in Canada.

The only known breeding population is on Pelee Island, Ontario. The reverse design by Canadian artist Luc Normandin captures all of the majesty, elegance and beauty of a whooping crane in flight. Fully extended, the birds broad wings fill the upper space of the image's field, revealing the black flight feathers that are normally hidden when the bird is at rest. The cranes long neck and legs are extended as it takes flight, lending the image a sense of energy and movement. Behind the whooping crane, its nesting habitat in the Canadian wetlands is beautifully rendered in fine detail, complete with the tall grasses and wooded areas along the marshs edge.

In the foreground, an adult narwhal remains partially submerged as it lifts its head above water through an opening between the ice floes; its spiralled tusk naturally draws the viewers eye upwards to the tapered point, which is extended towards the sky. Beneath the waters surface, the mottled narwhal uses its convex tail fins to propel its movements, curving its sleek body to provide lift as it surfaces. Swimming alongside the adult is a juvenile narwhal; armed with its own small tusk, this young narwhal remains submerged as a trail of air bubbles are released from the blowhole atop its domed head.

Its presence is both touching and meaningful, symbolising hope for the continued survival of this mysterious and captivating species in a changing Arctic landscape. The obverse features the effigy of Her Majesty Queen Elizabeth II by Susanna Blunt. Canadas Arctic waters are the seasonal home for a large percentage of the worlds narwhal population. Scientists and researchers are still trying to unravel the many secrets of this remarkably shy and elusive species, which is vulnerable to the changes occurring in the Arctic.

Member of Royal Canadian Numismatic Association. Be sure to add me to your. GST or HST EXEMPT item. I have no control over how long the postal systems take to get it to you.

Add a map to your own listings. The item "2015 Canada 3 x $125 coin Conservation Series pure silver 1/2 kilo each! Perfect" is in sale since Wednesday, February 10, 2021. This item is in the category "Coins & Paper Money\Coins\ Canada\Commemorative".

The seller is "vbref63" and is located in Edmonton, Alberta. This item can be shipped worldwide.