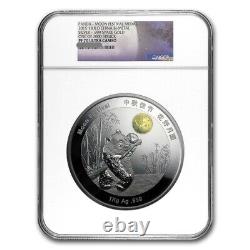 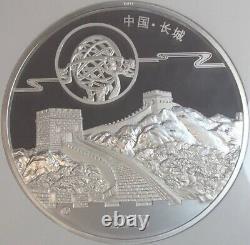 In the mid-1980s, NASA sent six large plates of 24-karat gold into space aboard the Space Shuttle Challenger. The gold, along with other types of metal and materials, was installed outside of the International Space Station to measure the effects of exposure to the severe condition of outer space, including potentially dangerous meteorites. This "space gold" remained in orbit for 69 months-over 5 1/2 years in outer space. During that time, this gold traveled over 625 million miles around the earth. In the early'90s, NASA brought the gold back to earth, where it was studied intensely for over 25 years. The gold was never intended to be made available to collectors. Each commemorative proof contains 2.2 pounds of 99.9% pure silver accented with a tenth-ounce of 24-karat "space gold".

It is struck to a massive 100 mmdiameter nearly 4? Only enough gold was recovered from orbit for China to create 2,000 proofs for the entire world. On this FIRST-EVER Bimetallic 1 kilo Panda, it features a single Panda gazing up at the moon lounging against a Bamboo branch. English Inscriptions include MOON FESTIVAL and 1 Kg Ag. Features the Great Wall of China in a night setting (also first of its kind) and has the Chinese map of the heavens and an ancient armillary sphere.

There is also a very special Mintmark that has never been on the face of a silver kilo coin in china, the famed'Y' mintmark from the Shenyang Mint, appearing on only two gold coins before. The mintmark is found below the great wall. Beneath both the Wall and the mintmark is the year 2015. The Moon Festival is the second largest holiday celebration in China, second only to Chinese New Year. To honor the 3,000-year tradition of the Moon Festival, China knew there could be no better choice than gold which had traveled closer to the moon than any other gold in existence.

This item is in the category "Coins & Paper Money\Bullion\Silver\Coins". The seller is "flacmatt_yfjumonq" and is located in this country: US. This item can be shipped to United States, Canada.