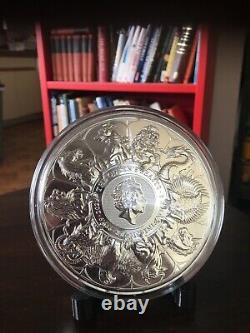 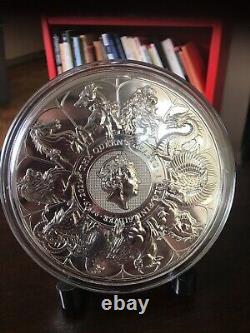 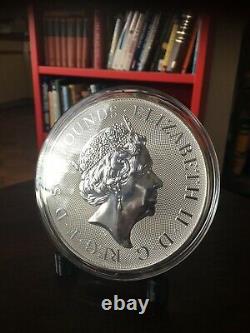 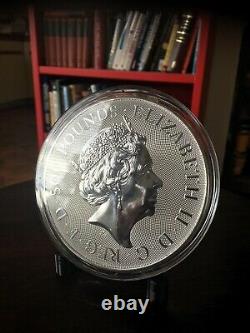 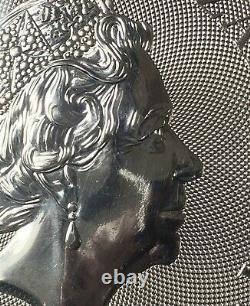 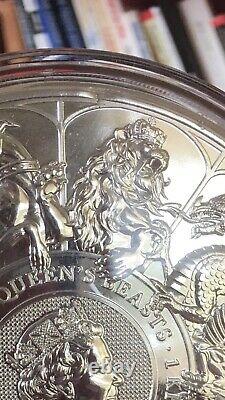 1 Kilo Queen Beasts'COMPLETER' 9999 Fine Silver (32.15 Oz) STUNNING! Watch the video in this youtube link. This is a legal tender with a 500 British Pounds face value, which means you can walk into any British bank and get 500 pounds of fiat currency. When the Royal Mint introduced the Queens Beast Series in 2016, it not only embarked on a new coin design series that would run for six years, but it also introduced a new bullion weight it had never offered before. Prior to the debut of the British Silver Queens Beast Coins, there had never been a 1 Kilo silver bullion coin from the mint. Arrives inside of an air-tight individual capsule. 11th and final coin design in the Queens Beast Series!

Includes all 10 heraldic beasts on the reverse! 9999 pure silver in BU condition. Bears a face value of 500 Pound sterling (GBP) backed by the government of Britain. The obverse side depicts Queen Elizabeth II.

On the reverse is an effigy of the Queen with the 10 heraldic beasts. The 2021 1 Kilo British Silver Queens Beast Collection coin available here comes in Brilliant Uncirculated condition. The final release in the Queens Beast Series doesnt feature a new heraldic beast, but rather, all 10 beasts introduced to collectors and investors from 2016 to 2021. The final piece in the series brings together all 10 of the Queens Beasts as passed down to her over the course of 1,000 years of history for the British monarchy. Each design in the series was created by Jody Clark, the same man who created the definitive fifth-generation portrait of the Queen that now graces British coins.

The obverse side of 2021 British Silver Queens Beast Collection Coins comes with the fifth-generation portrait of Queen Elizabeth II. Developed in 2015 by Jody Clark, this image showcases the Queen in right-profile relief with the George IV State Diadem Crown on her head.

The effigy of the Queen is set against a guilloche background element that offers security against counterfeiting. On the reverse field of the 2021 2 oz Silver Queens Beast Collection Coin, you will find the same portrait of the Queen shrunk in size to fit into a smaller portion of the coins central field. Around the effigy of the Queen, each one of the 10 heraldic beasts surrounds the Queen. From the Lion of England to the White Greyhound of Richmond, the beasts that have supported the Royal Arms of England over the last 1,000 years now surround the realms longest-reigning monarch. A great positive kick-luck to your collection.

Highly collectible item around the world! Auctiva offers Free Image Hosting and Editing. The item "1 Kilo Queen Beasts'COMPLETER' 9999 Fine Silver (32.15 Oz) STUNNING" is in sale since Wednesday, November 10, 2021. This item is in the category "Coins & Paper Money\Bullion\Silver\Coins". The seller is "superiorexcellency-com" and is located in Hayward, California. This item can be shipped worldwide.