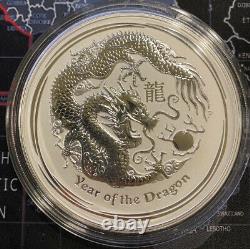 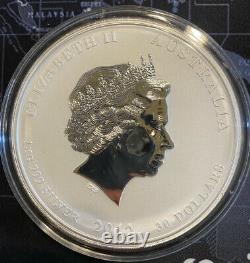 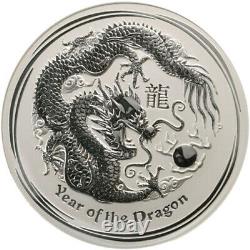 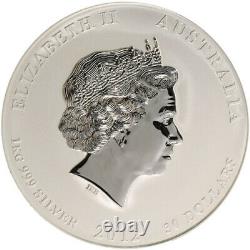 In 2012, The Perth Mint's internationally renowned Australian Lunar Silver Proof Coin Series II celebrated the Year of the Dragon, the fifth animal in the 12-year cycle of the Chinese zodiac. These superb proof quality releases are perfect for people born in "dragon" years - 1940, 1952, 1964, 1976, 1988, 2000 and 2012 - who are regarded as confident, enterprising, independent, self-assured, brave and passionate. The reverse of each coin depicts a traditional Chinese dragon, a long, scaled, serpentine creature with four legs, and a "pearl of wisdom".

The Chinese character for "dragon" and the inscription "Year of the Dragon" also appear in the design with The Perth Mint's traditional "P" mintmark. As well as appealing to silver proof coin collectors, these outstanding releases also make great gifts for people born in any year "ruled" by the Chinese lunar dragon. The fifth coin issued in the Lunar Series II collection from the Perth Mint honored the Year of the Dragon. The most revered beast in Chinese culture and mythology, the dragon is depicted on the 2012 Year of the Dragon coins offers popular artwork that showcases the dragon pursuing a flaming pearl. Today, 2012 1 Kilo Australian Lunar Dragon Silver Coins are available to you from JM Bullion.

Available to you inside of a protective acrylic capsule! Coin issued in the Lunar Series II program! Declared mintage of only 55,886 coins! Contains 1 Kilo (32.15 Troy oz) of.

999 pure silver in BU condition. Obverse includes Queen Elizabeth II in right-profile relief. Reverse depicts a dragon in pursuit of the flaming pearl of wisdom. The Lunar Series II collection from the Perth Mint featured 10 Kilo, 1 Kilo, 10 oz, 5 oz, 2 oz, 1 oz, and 1/2 oz silver coins for each design release. In the series, the Perth Mint put mintage caps in place only on the 10 Kilo and 1 oz coins. All other coins in the release schedule had unlimited mintages, meaning the mint would produce the coins through the end of the calendar year matching the date mark on the coin. All 2012 1 oz Kilo Australian Lunar Dragon Silver Coins are available to you today in Brilliant Uncirculated condition.

The coins are individually packaged inside of acrylic capsules. The Perth Mint produced these 1 Kilo Australian Lunar Dragon Silver Coins through the end of 2012 as long as demand continued. This resulted in a final declared mintage of 55,886 coins. On the reverse side of 2012 Australian Lunar Dragon Silver Coins is the artistic rendition of a large dragon slithering along as it pursues the flaming pearl.

This design is common in Chinese mythology and culture and signifies the pursuit of knowledge as the flaming pearl represents eternal wisdom. The obverse of 2012 1 Kilo Australian Lunar Dragon Coins bears the right-profile portrait of Queen Elizabeth II.

Her Majesty is depicted here in a 1998 design from Ian Rank-Broadley that debuted on British coins first in 1998 and followed quickly on Australian coins. It remains a popular design on the coins of Commonwealth nations around the world to this day. Founded in 1899, the Perth Mint is the oldest operating mint in Australia. Originally a Royal Mint of England facility, the Perth Mint is now owned by the government of Western Australia and operates independently of the Royal Australian Mint.

The item "1 kg kilo 2012 Lunar Year of the Dragon Silver Coin" is in sale since Friday, August 7, 2020. This item is in the category "Coins & Paper Money\Bullion\Silver\Coins". The seller is "kesm-9078" and is located in Fort Worth, Texas. This item can be shipped worldwide.